It’s going to be the biggest movie of the year, hands down. Harry Potter and the Deathly Hallows Pt. 2. Imagine: The end of the Harry Potter saga. What is Daniel Radcliffe

now, like, 48? Well, he’s still playing a 17 year old, and that 17 year old is about to finish off the fight of his life. Will peace return to the wizarding world? Will Lord Voldemort reign supreme forever?

Of course, you already know the answer to these questions if you, say, read the book Harry Potter and the Deathly Hallows, or even just have some idea of how these kinds of things work, but that doesn’t mean the journey isn’t fun anyway, and we just wouldn’t be NECA if we didn’t send you out to the theaters this weekend in style.

A quick search on this very site will reveal a ton of new items for the second Deathly Hallows. They’re the ones marked “DH2,” and if all else fails, you can always go through all the pictures of items and just find the ones where Harry, Ron and Hermione look the oldest. Seriously, just take a look at the three of them on our new bookmarks. They grow up so fast.

But on to business! We’ve got thick Hogwarts and Deathly Hallows rubber bracelets, the requisite thermal mugs — Harry and the trio — and bag clips of the Dark Mark, Expelliarmus and the Gryffindor crest with extra star charms. And we’ve done Harry Potter keychains before, but never quite like this. We’ve got two Hogwarts crest keychains, one gradient and one regular crest, and a Deathly Hallows logo that if you don’t look twice, you’d swear was a 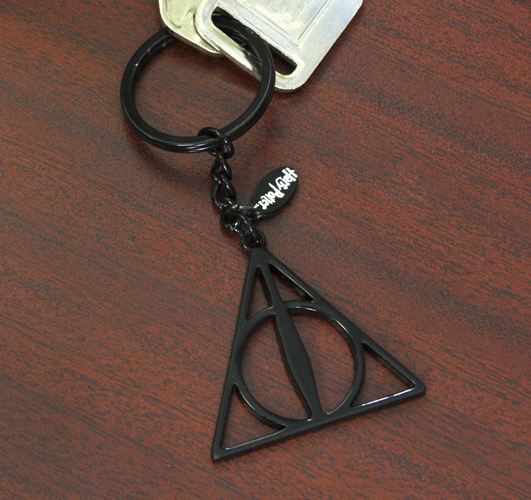 That same Deathly Hallows logo is available as a metal ring — as is a Gryffindor crest — or even a vinyl sticker. Also in stickerland, there’s a Hogwarts Express sign, and if you’d rather have something thumb-tacky than adhesive, might we suggest our stitched Hogwarts pennant. It’s good for bedrooms, living rooms — or since if you were 7 when the first Harry Potter movie came out, you’re turning 17 this year — the garage where you park your car.

All kidding aside, we’re thrilled to be a part of the Harry Potter saga as always, and coming up on July 15, we can’t wait to see the final installment of this generation’s greatest and most magical epic tale. Let the summer of Potter begin!