He’s like a one-man catchphrase factory, and if you take a second to look up “Achmed the Dead Terrorist” over on YouTube, you’ll see that in one video alone, comedian/ventriloquist Jeff Dunham has over 135 million views. In case you’re wondering, yes, that’s a lot.

ated telecast in the network’s history, so we think it’s safe to say the dude’s politically incorrect rampage isn’t about to stop anytime soon. In 2009, Comedy Central gave him his own show, and he’s continued to find massive success with characters like Peanut, Walter and the always controversial Achmed the Dead Terrorist.

The “duh” factor here is high — as in, “Well of course NECA‘s going to do Jeff Dunham merchandise. Duh” — but we’re still thrilled to have the chance to bring Dunham‘s puppets to life. Our first wave of goodies is sure to please Dunham‘s growing legion of followers.

For the ultimate fan, we’ve got 18″ talking dolls of Peanut, Achmed and Walter. These are for the Dunham aficionados, who want the chance to bring the real thing home. Each doll has multiple sayings with some choice catchphrases and is made from molded rotocast plastic and plush, for an even more realistic look. Whether you’re buying for someone else or for yourself, they’re the peak of Dunham gift-giving.

But maybe you don’t want to go that far, or you don’t have room, or your wife thinks it’s weird that you sleep with Peanut between the two of you at night. Whatever. We’ve still got you covered. Our series of talking Head Knockers features the 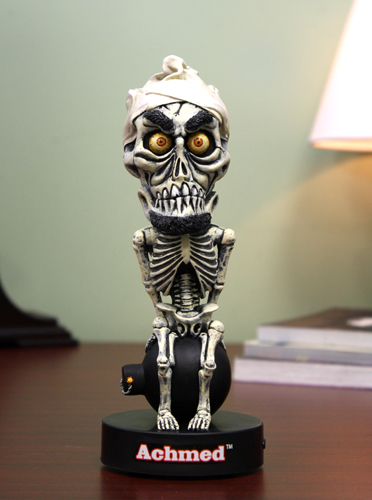 same characters and the same phrases that are perfect for home or office, and our keychains you can take with you wherever you go.

Seriously, what could be better for your road rage than laughing it off with Achmed‘s threats of “I keel you?” It’s a good thing we’re doing here, people.

And hey, if the voices all get to be a bit much — that happens sometimes — and you’re looking for something a little less talkative, we’ve got Achmed and Peanut window clings that won’t say word one. Trust us, they just hang there. If you hear them start to talk, call a doctor.

Expect more Dunham love to come from NECA, and remember, there are no arguments like the arguments you have with yourself.