Next up in our seemingly endless line of awesomeness? How about some righteous Friday the 13th Jason Vorhees 7″ action figures?

We teased these two versions of the good Mr. Voorhees a while back, but as of today, both Battle Damaged Jason Voorhees and Definitive Jason Voorhees, based on Friday the 13th Part III, have started to ship.

A Tale of Two Jasons

Make no mistake — the Jason Voorhees in this series of action figures is the Jason Voorhees. In both the Battle Damaged and Clean versions, it’s the original Jason and he’s as monstrous as ever. Dig in if you dare: 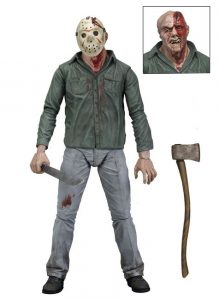 Yeah, some afternoons are rougher than others. Battle Damaged Jason has taken a couple shots to the head, but with that machete and an extra axe, in case your head’s harder to take off than initially anticipated. 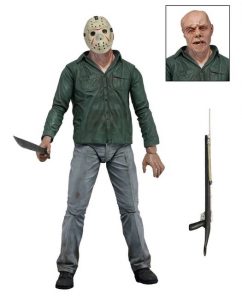 It’s a face only Mrs. Voorhees could love. Or, you know, not. Either way, he’s the Definitive Jason Voorhees 7″ action figure. Jason comes with his signature machete and spear gun. Needless to say, Vera Sanchez never knew what hit her.

In the meantime, if these aren’t enough for you, don’t forget we’ve got exclusive Jason Voorhees replica masks from The Final Chapter and Part III to bring the horror to life. Only, you know, not too much to life. No jailtime, people. Keep it civil.

Stay tuned for news and updates on Friday the 13th and all your favorite games, movies and more!