Katniss Everdeen’s Leather Hunting Jacket from The Hunger Games? Yeah, We Made That

May the Props be Ever in Your Favor

This past August, to celebrate the DVD/Blu-Ray release of The Hunger Games, Target had a few ultra-exclusives for sale. There were autographs, 16k gold mockingjay pins, and a replica of Katniss’ leather hunting jacket — and the jacket? Yup, we made that too.

The jacket is an accurate replica with a few added bonuses – as you can see from the pictures below, we designed a unique mockingjay zipper puller as well as added the District 12 logo to a sleeve.

There were only 100 made, and they’re long gone, but for anyone who thinks all we do is make Predator action figures (which, by the way, we’re frickin’ awesome at), feast your eyes on the movie-accurate excellence of the following: 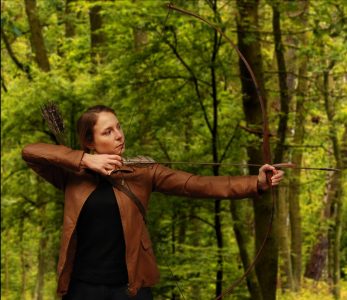 We’ve done killer high-end prop replicas before — see also the Gremlins 2 Stunt Puppet Replica (limited to 1000 pcs each color) or the Portal ASHPD Replica (now customizable) — but this one had the advantage of not only being totally accurate to the Hunger Games but also being a really nice jacket. Congrats to everyone who managed to get one before they were gone!

Thanks to everybody for their ongoing support of what we do. Without it, we wouldn’t be able to do stuff like this and make something really special for the ultra-fans out there. We’re fans too, so it’s great to all get to nerd out together. More to come.

If you’re looking for more of our Hunger Games merchandise, please our official The Hunger Games online catalog.

We’ll of course have much more on The Hunger Games as we get closer to the release of Catching Fire next November, so keep an eye out for news and updates to come!