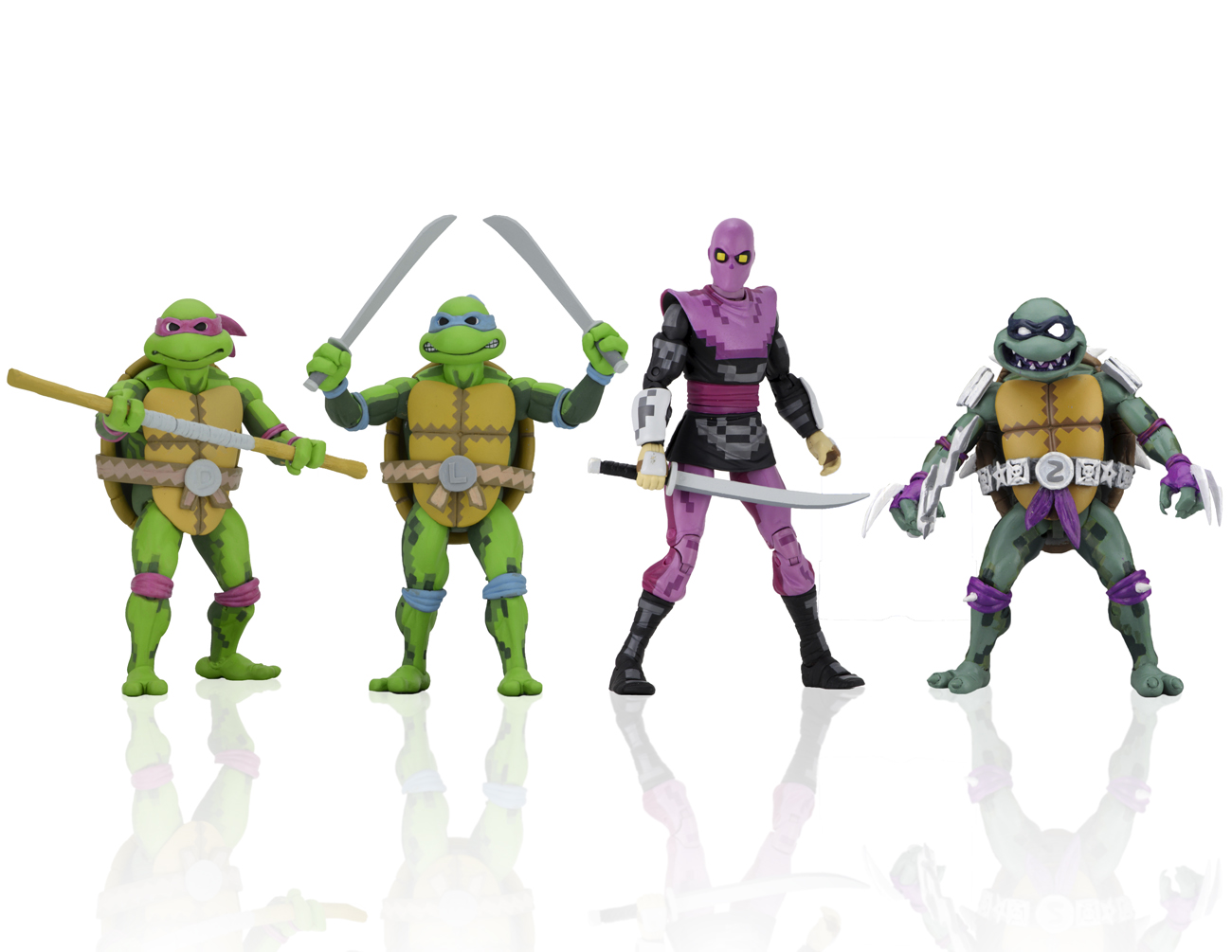 Following up on our first arcade game-based TMNT figures, we turn to the second Turtles game!
From the classic 1990s Turtles in Time video game, we’re excited to offer a new line-up of 7” scale action figures. Series 1 includes Donatello, Leonardo, Slash, and a Foot Soldier. Donatello, Leonardo and Foot Soldier come with signature weapons and a brand new hoverboard with display stand that can be used for even more poses. The evil mutant turtle Slash comes with sword accessory.
All feature special deco that recreates the pixilated look of the video game and come in individual window boxes with graphics from the original arcade cabinet. 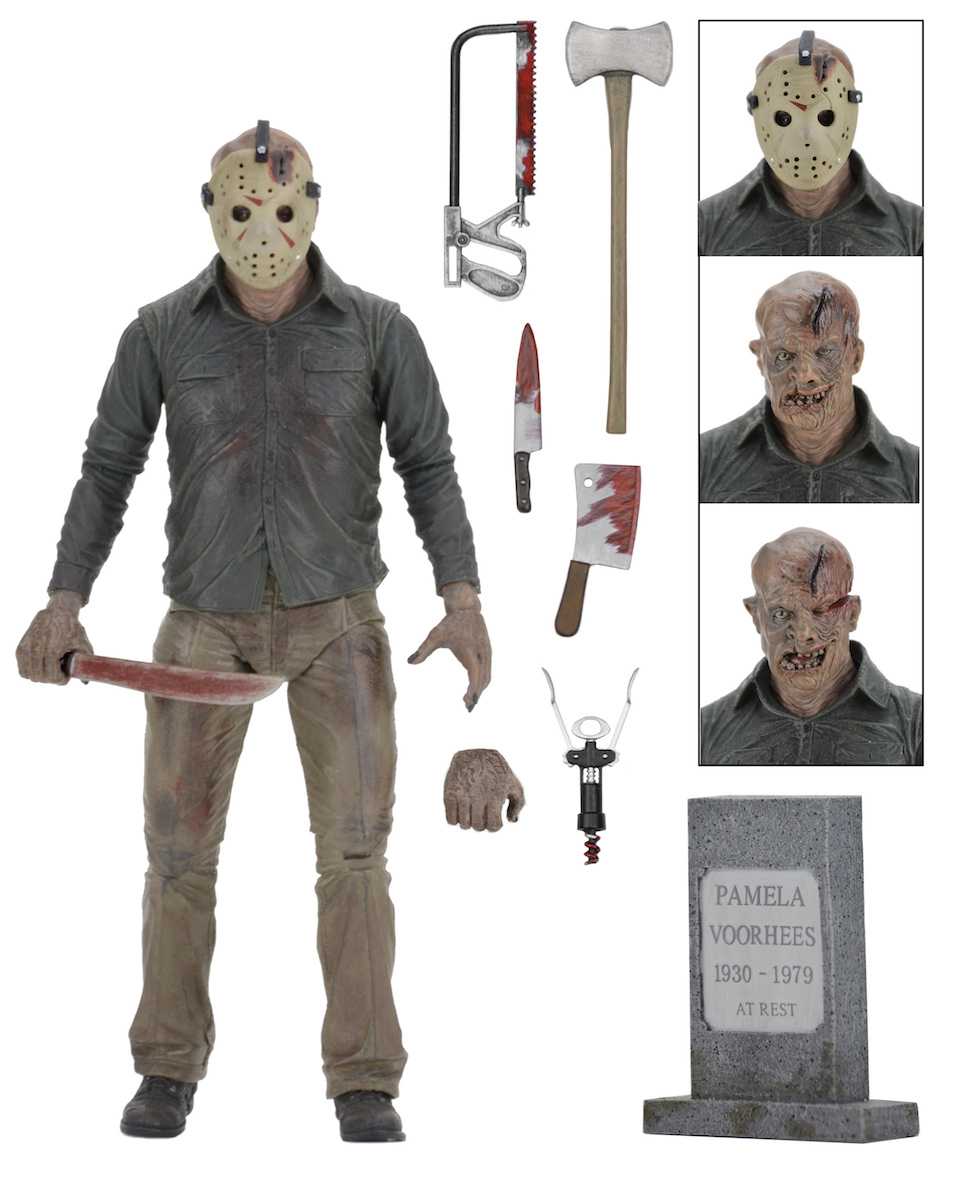 NECA is proud to present the definitive collector’s version of Jason as he appeared in Friday the 13 Part 4: The Final Chapter!
We’ve taken our classic Part 4 Jason and given him the “Ultimate” treatment, with deluxe packaging, tooling improvements for production of masks, and a slew of new accessories. Plus, you can recreate his (not quite) fatal wound by sliding his machete into the side of his head.
This deluxe 7” scale action figure features over 25 points of articulation and is packed with accessories. It comes with two masks, two interchangeable head sculpts, knife, corkscrew, tombstone, hacksaw, cleaver, machete, and axe.
The packaging is deluxe too, with a front window flap featuring the movie’s original one-sheet poster art! 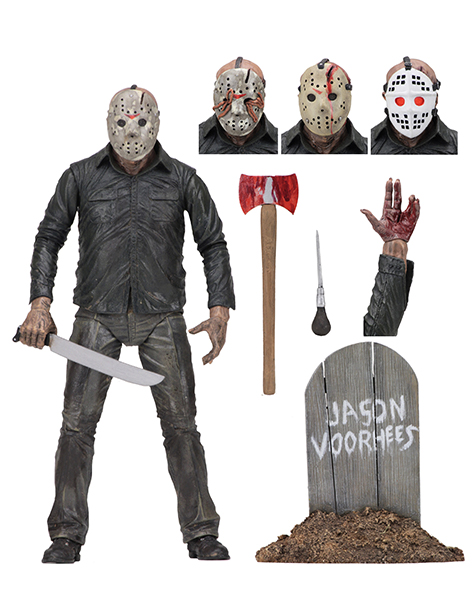 NECA presents the definitive collector’s version of Jason from Friday the 13: A New Beginning! This is Jason as he appears in the nightmares that haunt Tommy, who has been living in mental institutions since he killed Jason in Part 4.
This deluxe 7” scale action figure features over 25 points of articulation and comes with 4 unique, interchangeable heads to represent different dreams (bloody mask, resurrection mask, grave mask and a special mask based on the one-sheet poster). It’s also packed with accessories–machete, axe, ice pick, and tombstone. Bonus: includes an extra left hand with split fingers that can be used with this figure or the Ultimate Part 4 Jason!
Comes in a display-friendly deluxe window box with opening flap.