You Voted – Our 5 Scariest Toys Ever

We’ve made some pretty scary/nightmarish toys here at NECA. But which ones are the scariest? Could it be Freddy Krueger? Jason Voorhees? The creepy Exorcists Regan Possessed figure? Hellraiser? Our 18 inch Alien? Barbie? The Dead Space Necromorph Slasher action figure? Well, we have the answer.

Yesterday, we conducted a poll on Facebook and Google + to see what the public thought were the scariest toys. Here are the results: 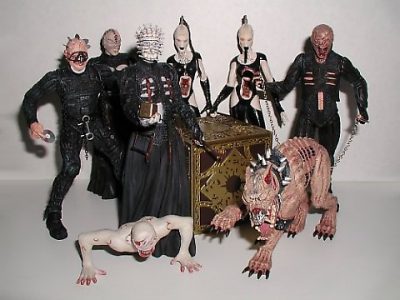 No surprise here. Even though the Hellraiser family made its debut back in 1987, people are still frightened by his terrifying face and, of course, the pins in his head. Besides, he’ll tear your soul apart.

Additionally, he series features some of the most bizarre characters in Horror history and extremely disturbing sadomasochism scenes.

WARNING – video below shows just how scary and disturbing the Dead Space figure is. Before you watch it, here’s an actual comment from a youtube viewer:

I just can’t watch the rest of this. Call me a wuss, but this figure is just distubing. Just looking at it makes my elbows, back, and leg hurt. toys210, I’m sure you did a good review, but this figure creeps me out. May God help the poor todler that has to bear its eyes on this toy.

Honestly, this is one of the most grotesque characters in video game history. His elongated arms with biological talons, his whole torso has two sets of arms (what is up with that??) and is curved at pretty much a 90 degree angle, it’s no wonder the Necromorph Slasher is one of our scariest toys. 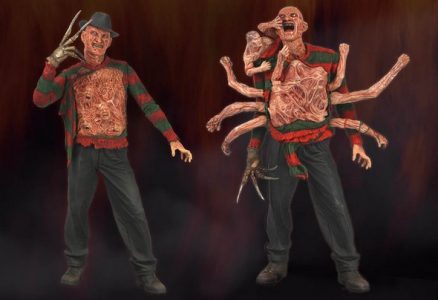 1-2, Freddy’s coming for you. 3-4 better lock your door. 5-6 grab your crucifix. 7-8 better stay up late. 9-10 never sleep again. The Freddy Krueger figures are nightmarish to say the least. 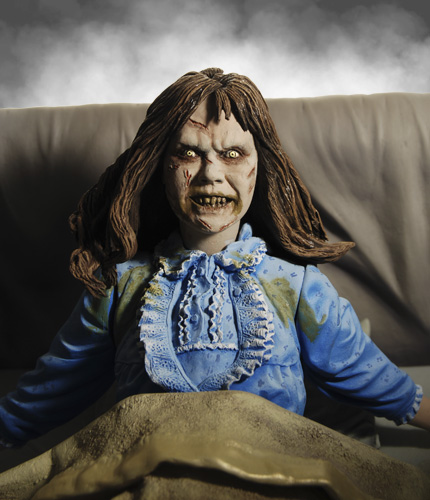 Who hasn’t seen The Exorcist? If you haven’t, then you probably sleep just fine at night. The scene where Regan’s head turns 180 degrees while being tied up in bed is one of the scariest in cinematic history. This is why the Regan Possessed figure was voted one of the scariest.

Below is a detailed video review of this amazing Predator action figure:

Imagine free falling into a jungle and being hunted by these guys? We’ll pass. But there’s a reason why these reptile looking dogs made it to our list. If this thing came at us we’d be running full speed in the opposite direction.

We’ve made our share of scary toys. But these definitely deserve the title “NECA’s Scariest Toys Ever”. Between Hellraiser’s head full of pins, Dead Space Necromorph Slasher’s talon’s, Freddy Krueger’s haunting face, Regan’s spinning head and the Predator Hound’s reptilian characteristics, it’s no doubt that these are some of the scariest toys to ever be made.