We’re starting Toy Fair 2019 off big this year with 2 new 1/4 scale figures. Pennywise from the 2017 IT Movie and Michael Myers from 2018’s Halloween film are coming to NECA’s 1/4 Scale line of action figures. To continue today’s horror theme, we’ll also be releasing Ultimate versions of Roy from Friday the 13th Part 5, Michael Myers from Halloween 2, and a 1990 Pennywise v2!

*For more images and info, be sure to click the product links below each description.*

From the acclaimed 2017 horror film IT, drawn from the pages of Stephen King’s original novel, NECA presents the highly requested Pennywise as a 1/4 scale action figure!
Based on Bill Skarsgård’s portrayal of the nightmare-inducing clown, this menacing 18” figure has been painstakingly detailed to be as accurate to Pennywise’s elaborate costume as possible. To recreate the most terrifying scenes from the movie, the fully articulated figure features interchangeable hands and signature red balloon.

Michael Myers returns to NECA’s 1/4 scale action figure line!
Based on his appearance in the thrilling new Halloween movie, this all new Michael stands over 18″ tall, with over 25 points of articulation and plenty of accessories. The figure comes with knife, hammer, and victim’s head and is a menacing addition to any collection.

Due to popular demand, NECA delves into the classic Halloween movies!
Based on his appearance in 1981’s Halloween 2, Michael stands over 7″ tall and has received the Ultimate treatment, with over 25 points of articulation and tons of accessories. The figure comes with 3 heads, syringe, knife, hammer, and opening jack o’ lantern.
Comes in display-friendly deluxe window box packaging with opening flap. 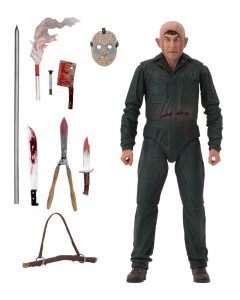 NECA presents the definitive collector’s version of Roy Burns, the deranged impostor Jason from Friday the 13th: A New Beginning!
This deluxe 7″ scale action figure features over 25 points of articulation and comes with tons of accessories—removable mask with blue chevrons that were unique to Part 5, cleaver, hunting knife, machete, garden shears, road flare, railroad spike, and much more.
Comes in a display-friendly deluxe window box with opening flap.

From the revered 1990 horror mini-series Stephen King’s IT, Pennywise the killer clown is back in a new Ultimate figure!
Based on Tim Curry’s portrayal of the terrifying clown, this 7″ scale figure is faithful to his on-screen appearance and packed with detail and accessories. Pennywise is fully articulated and features a total of three all new interchangeable heads, plus interchangeable hands (including a massive monster hand), “Turn Back Now” balloon and 3-D “emerging hand” book.
Comes in collector-friendly deluxe window box packaging with opening flap.

That concludes Day 1 of Toy Fair. Come back tomorrow for more news and announcements as we head into Day 2!

Check out our recaps from previous days!
Pre-Toy Fair 2019 Announcements