By now, you probably already know that we’re bringing Assassin’s Creed Brotherhood DaVinci’s Flying Machine to life in all its glory. This awesome feat of engineering (ours and Leonardo’s, I should add) is a GameStop exclusive and is currently available for sale.

Due to its huge success, we have a decent amount of people asking for the assembly instructions. Well, here they are:

Putting Your DaVinci Flying Machine together 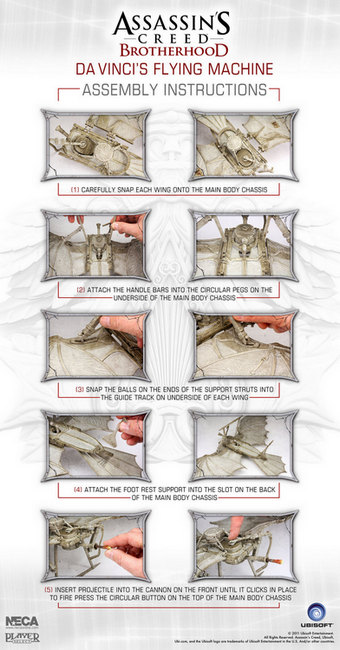 Because the glider wingspan extends over 2 feet and the wings and tail are articulated, it’d be impossible to ship it assembled. It is, however, quick and fun to put the Glider together.

A 6″-7″ scale figure can be placed in the harness underneath and the cannon pivots and fires a spring loaded projectile. If you’ve set yours up, please share some pictures with us over on our Fan Page or reply to Randy on Twitter.