From the cult classic Nightmare on Elm Street movies, this clothed action figure is based on Freddy’s tuxedo appearance in Dream Warriors!
Freddy stands 8” tall and is fully poseable. He’s dressed in a fabric tuxedo with red and green striped bow tie and pocket square, and comes with a replica model of the Elm Street house that lights up. Blister packaging with resealable protective clamshell features custom artwork created by Nathan Thomas Milliner just for this release! 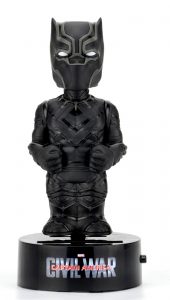 Solar-powered Body Knockers let you enjoy hours of fun with your favorite characters – no batteries needed!
From Marvel Studios’ Captain America: Civil War, Black Panther stands approximately 6.5″ tall and rocks from side to side when exposed to light. Collect all your favorites and watch them dance the day away!

From the Friday the 13th fear franchise, we present the definitive collector’s version of Jason as he appeared in Part 2 — featuring a 100% brand new Ultimate body!
This deluxe 7” scale action figure has two interchangeable heads and over 25 points of articulation. It’s loaded with accessories, too: campfire, his mother’s severed head, machete and knife, pick axe, spear, and pitchfork. Packaged in a collector-friendly deluxe window box.